Easily where we do most of our work, Sage LaTorra, Adam Koebel’s masterwork is an inspired bit of design that commands almost all the room we have over at SPG HQ’s RPG table. Narrative focused, incredibly well flowing and so simple to pick up, teach and go. The lessons it has on GMing have stuck with us and informed our design, both on the table and off of it, and we’re super happy to have contributed to the excellent DW community.

We’ve designed a fair number of characters, a couple of adventures and a setting for use in the Dungeon World setting. You can learn more about them below!

The great Lich Draxxus has unveiled his most incredible invention yet! A dimension with countless raised skeletons, each instructed to conduct simple arithmetic, based on the skeletons around him. With millions of these creatures all working at once, Draxxus has been able to make developments in magical studies that would have taken centuries! His Bone Zone is the talk of the world!

Journey into the Infernal Bone Machine, root out the infection rendering it inoperable and escape with your lives, if you dare!

The Infernal Bone Machine is available at DriveThruRPG

The good wizard Justrix was once the most important person in town, using his magic to help the fields grow, to protect the town from monsters and teach the townsfolk all sorts of alchemical and magical knowledge. 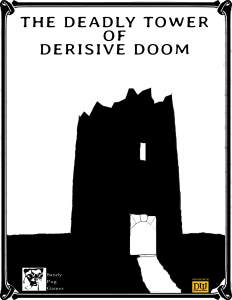 But something is amiss – Justirx has vanished into his tower on the edge of town, and hasn’t been seen in weeks. Guardsmen from the town have investigated, but they too have gone missing. The crops are failing, and those sensitive to it sense an immense evil emanating from the tower. Your party has been hired to find out what has happened to poor Justirx, and save him – if you can.

The Deadly Tower of Derisive Doom is a full adventure for Dungeon World that gently pokes fun at some of the more classic RPGs. Delve into the tower and uncover a wizard who’s mind is corrupted by hit die, encounter tables and Armor Classes!.

Designed mainly as a one-shot or campaign starter, this adventure comes complete with fronts, new enemies, multiple endings, a challenging series of encounters and scenes, interesting plot hooks, portents, handouts, maps and anything else you might need to start your next campaign, or spice up the current one! Available at DrivethruRPG

Here’s some of the best classes we’ve ever made, you can also check out our DriveThru page for more sheets, these are just a sample!

My judgement is absolute, and it will be served 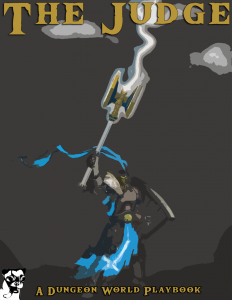 As battle becomes inevitable, the mighty steel-clad behemoth lays down the law, and through magics older than time, justice is enforced upon even the most lawless of lands. Their weapon empowered by the very elements, their tongue weaving ancient arts of pure righteousness, the Judge wades in, ready to protect the most sacred of forces – Justice.

The Judge is a new complete character sheet for use with Dungeon World. With the ability to declare the rules of battle, enforce contracts with their magical seals and weave laws from the air around them, they’re also a formidable wall for their party, their mighty shield and immense elemental weapon warding off foes and providing respite for their allies. Available at DriveThruRPG 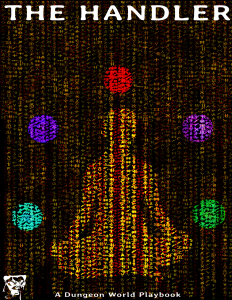 “You’ve escaped, and you think the world’s a huge place, and you can hide anywhere, right? I’m here to tell you… that world? I own it. Your world is getting smaller by the second. And you can’t hide anywhere from me. Every database, every security cam, and every police band has my fingerprints on it. Every moment you’re out the noose pulls tighter”

The team is on the edge of defeat, their foes close the circle as your hands move so fast they become a blur. You embolden your friends, restore their strength, snatch your enemies weapons and strengths from their claws and steel your party with invaluable knowledge about what they face. Bolstered by your spells, and armed with your information, they strike! 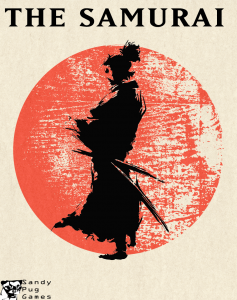 The sun fades on the horizon, washing the shore in a soft orange red glow. You face your opponent, a worthy foe, and grant the other the smallest of nods in respect for what is to come.

You grip the hilt of your blade, taking a deep breath to steel yourself before the split second of violence that will decide it all. Your foe does the same. Somewhere, a crane caws.

The Samurai is a new and complete playbook for Dungeon World, take on the mantel of one of history’s greatest warriors, stick to the path of the warrior and inspire greatness in your allies, master bladework and art to become the greatest samurai in the land! Available at DriveThruRPG

The victim lies dead in a pool of blood, the door is locked and there is no murder weapon, no witnesses and 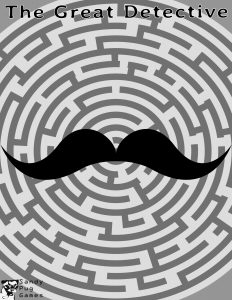 no apparent motive. For all intents and purpose, the case is cold.

That’s where you come in. Through years of practice, study and dedication, you are the world’s greatest detective. No clue goes unnoticed; no discrepancy in testimony goes unchecked. Your powers of reason, logic, method, deduction and common sense are unrivaled throughout the land.

Your mind is your weapon, your inquisition is your shield and your quest for truth is your path.

The Greatest Detective is a fully playable Dungeon World Playbook inspired by the adventures of Sherlock Holmes, Hercule Poirot, Miss Marple and more! Available at DriveThruRPG! 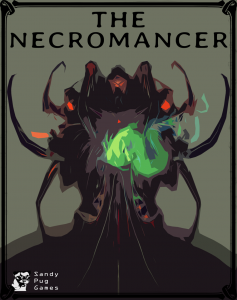 The bad news is, you’re dead. The good news is that you’re taking it pretty well.

You awake as a specter, marked with deaths touch. You don’t remember much about your previous existance, but you do know all there is to know about death. You raise your hand, and watch as the energies of the dead move to your whim. You make corpses dance, commune with spirits, and eat souls for breakfast.

The Necromancer is a new and complete playbook for Dungeon World, bask in necrotic energies, summon hordes of undead to do your bidding and create dark golems with your power! Available at DriveThruRPG 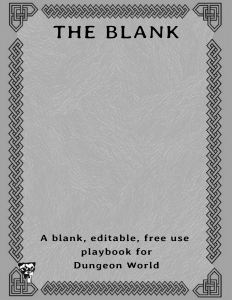 This is a blank, editable playbook, to be used in creating your own classes. I’m releasing it under Creative Commons International Attribution 4.0 so feel free to use this to make your own playbooks, and even sell them if you like, just make sure to mention where you got it!

All it’s missing is images for damage dice, and any box graphics you’d like to use for moves and such. It’s formatted and has text boxes in place already, just needs your sweet playbook ideas!